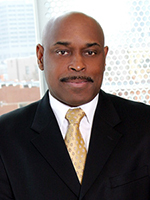 Seyferth Blumenthal & Harris Partner Charlie Harris was the subject of the front page feature story in the Monday, June 18 edition of Missouri Lawyers Weekly. The article chronicled not just Harris’ accomplished law career, but also his ability to find balance in his life through a passion for music.

Scott Lauck, who authored the story, chronicled how Harris came to embrace playing the bass guitar starting in 2011. He has since recorded multiple albums with his band Chilliott.

The full article, titled “The Passion of Charlie Harris,” can be read here. Embedded in the online version is a portion of Harris’ interview with a sample of his music in the background.

Harris joined SBH as a named partner in March 2008 after a stint as president of the Missouri Bar. He was the first African American to hold that position.

Currently, Harris has a national practice focusing on representation of corporations, non-profit agencies, corporate officers and directors, and municipalities against claims of disability, race, gender, sex and age discrimination, sexual harassment, and wage and hour and collective actions. He is known for his dynamic trial advocacy skills and his ability to craft solutions to difficult business related problems.